Small households deal with weeds fairly easily, but for those of us who have larger properties, a weed problem can become more like an infestation if not dealt with appropriately.

Enter Eraser Weed Killer, a product with many claims of successful weed removal that we decided to investigate.

This is everything you need to know about Eraser and what it can/cannot do to help you decide if it is right for your needs. Here is a snapshot of the product: 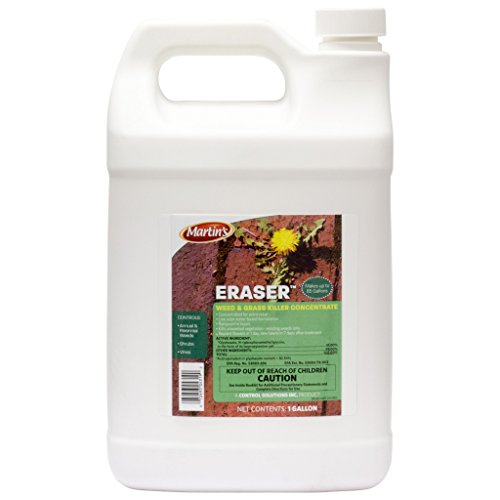 What Is Eraser Weed Killer?

A concentrate that kills both weeds and grass developed by Martin’s. Their weed killer works by getting deep down into the root to kill the weed/plant within days of application.

It is a post-emergent (meaning it kills plants after they have germinated and are actively growing) herbicide that contains 41% Glyphosate and has an added surfactant to increase how well it works.

So if you have weeds that are already growing, then Eraser is a great option.

Who Would Want To Use Eraser Weed Killer?

This weed killer is powerful and is predominantly used for large scale weed problems.

You could buy a full container for your small garden, but you’d end up using so little that it may not be worth your money.

But for larger properties Eraser is a winner.

It’s one of the better weed killers on the market because of its effectiveness at eradicating weeds, and because it’s so reasonably priced.

Ranch owners, large household gardeners and farm managers can get enough weed killing power from a container of Eraser to wipe out hundred of weeds.

These are the people who would most benefit from using this product.

If you are looking specifically for how to kill dandelions – our article has a bunch of ideas for that since it is such a common problem!

How Much Do You Need And How Much Will It Cost?

Using it is simple. But first you will need to decide how strong you want it.

Some weeds are hardier than others, so definitely read up on the particular weed/weeds you want to kill.

Choose between a pint, a quart and a gallon of Eraser depending on how much you need. Bear in mind that you will be diluting this herbicide by half an ounce per 1 gallon of water for trivial weeds, and 1 ounce per gallon for perennial weeds.

The price of Eraser is probably it’s biggest appeal.

How Should You Use Eraser Weed Killer?

It’s important to remember that Eraser is a non-selective weed killer. This means it doesn’t only target weeds, it kills every other plant as well.

You may want to cover your neighboring plants during the spray phase.

If you think you can target your weeds without touching other plants, then the rest of your garden should be safe from this powerful herbicide. Some people have complained that Eraser doesn’t work. There’s a reason for this. Eraser works on growing weeds, so if you spray it on weeds that are not actively growing, it won’t do much to kill them.

For this reason it’s best not to use Eraser Weed Killer during winter months unless you have a winter weed on your hands. Remember that this weed killer is a post emergent one, so it will take a week to do what it needs to.

To use Eraser most effectively, use a fairly large dispenser spray bottle. Eraser gets diluted a lot, so you’ll need enough to make it count. Mix between ½ oz to 1 oz of the herbicide with 1 gallon of water in your spray bottle. When spraying, be sure to cover or avoid other plants as this herbicide will kill all plants it touches.

Here is a great video from a pest & lawn company on how to use a non-selective herbicide in the safest and most effective way.

How Long Does It Take For Eraser To Work?

One important note to remember is that Eraser takes a full week to work. You won’t see anything happen once you’ve sprayed your weeds, but within a week or less they will wither up and die.

This is because Eraser is made up of 41% glyphosate combined with a surfactant for increased strength. These ingredients work actively in plants to destroy them from the inside out. A week after you’ve sprayed, you’ll notice how the weeds simply shrivel up and die.

Once you’ve successfully rid an area of weeds, go back and clean up the dead plants, as the active ingredients in Eraser will remain a few days after it’s done its job. If you have animals, keep them away from that area during the weed killing phase; as well as for at least 2 days after your weeds are dead.

The ingredients in Eraser are not natural, but rather chemical; so some caution is recommended.

You may be wondering whether Eraser is safe for your pets; as well as for your farm animals who graze the grass nearby.

When it comes to pets, you can rest assured that it is moderately non-toxic.

Pets don’t generally eat plants—especially not plants that smell like stinky poison. And since Eraser is applied directly to plants and does not penetrate the soil – your household pets should remain safe.

But it’s always best to be on the safe side and keep your pets away from the area while you’re spraying, and a week after while it is taking effect.

More caution should be used with your grazing animals though. They may not be as discerning when eating grass or weeds, so remove them from the area when you spray and wait about 7 to 9 days before allowing them near the area again.

Eraser is relatively safe for humans & animals, but precaution is always advised during the application process. Wear gloves while spraying, and a mask would be a good idea too—especially if it’s windy.

What Are People Saying About Eraser Weed Killer?

For the most part, reviews about Eraser Weed Killer are very positive.

Some have complained about its ineffectiveness, but this may be due to incorrect application or using it on weeds that are not actively growing. Various concentrations are needed for different types of weeks and or plants so some testing may be needed for it to work on your specific weeds.

The general consensus is that Eraser DOES work. So if you’ve been trying inferior products to eradicate weeds, try Easer and let us know how you fared.

Do Not Confuse Eraser with Eraser Max!

This post really focused on the traditional Eraser weed killer, but there is also Eraser Max which kills weeds a bit differently.

Below is the difference between the two so you are sure you get the correct one for your needs.

Eraser Herbicide has glyphosate and does not penetrate the soil so it will not affect other plants that are near the weeds you are trying to kill.

Eraser Max Herbicide has glyphosate but also an ingredient called imazapyr.  Imazapyr penetrates into soil and can affect plants by their roots.

Do not use around vegetation!